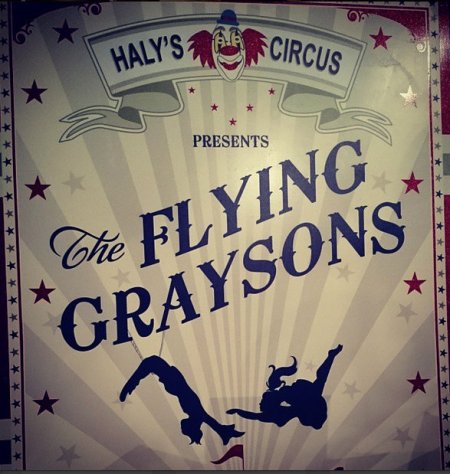 While the twelfth episode of GOTHAM is set to air next week on FOX, episode sixteen is currently filming and will bring Haly’s Circus and The Flying Grayson’s to the famed fictional city.  Those two names will instantly have comic book fans thinking of Dick Grayson aka Robin, Batman’s partner, who later becomes Nightwing, a hero in his own right and leader of the Teen Titans.  Since Batman’s alter ego Bruce Wayne is currently 12 years old, Robin won’t be appearing on this show, but his parents will be. “They  are much younger at this point, so we’ll be meeting them as Mary Lloyd and John Grayson, with the former apparently the daughter of a clown who is in love with John, the son of a trapeze artist. there will be a fight between the clowns and trapeze artists, with Gordon later questioning the ringmaster and “an evil clown” following a murder.” While it is unknown who is playing Mary Lloyd, John Grayson will be played by actor Rob Gorrie (Law & Order: SVU, One Life to Live) No word on when this particular episode will air as of yet.

Meanwhile, while we wait for CBS to cast the lead role in their SUPERGIRL live action television series, the network has given more details on the show. In regards to the type of show we should expect; “There will be [crime] cases, but what [executive producers] Ali Adler and Greg Berlanti pitched was a real series arc for her. She’s a crime solver, so she’s going to have to solve a crime. She’s going to get a bad guy.” The character of Supergirl herself is said to be “a very strong, independent young woman. She’s coming into her own. She’s dealing with family issues. She’s dealing with work issues. It’s a female empowerment story. If you look at the strong female characters we have on the air, it really is resonant of that … We’re big feminists. It’s her intellect, it’s her skill, it’s her smarts. It’s all of those elements. It’s not just her strength, which she does have.” As I noted the lead role is yet to be cast, so what is the network looking for? “She’s got to be an every woman,” she said. “She’s got to be specific. She’s got to be a terrific actor. So I think in this case, it’s looking for someone who embodies both the freshness and the exuberance of being a young woman in today’s challenging climate and being someone who can carry this kind of series on her shoulders. It’s a big, big show.” After casting the lead role, the next thing fans will over analyse is the costume. Regarding that CBS Entertainment chairman Nina Tassler said; “We have seen the costume,” she said. “Awesome costume.” Tassler added that the costume was being made by Oscar winner Colleen Atwood, who also did the costumes for Arrow and The Flash.” Hopefully it won’t be too long before we find out which actress will leap into action as SUPERGIRL.